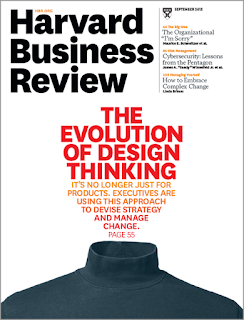 Conforme os autores, “…design thinking principles have the potential to be even more powerful when applied to managing the intangible challenges involved in getting people to engage with and adopt innovative new ideas and experiences“.


Transcrevo a parte inicial do artigo, sendo que o “link” para acesso à íntegra do mesmo pode ser encontrado ao final desta postagem.
———————————————————–
Desig for Action
by Tim Brown and Roger Martin
Troughout most of history, design was a process applied to physical objects. Raymond Loewy designed trains. Frank Lloyd Wright designed houses. Charles Eames designed furniture. Coco Chanel designed haute couture. Paul Rand designed logos. David Kelley designed products, including (most famously) the mouse for the Apple computer.
But as it became clear that smart, effective design was behind the success of many commercial goods, companies began employing it in more and more contexts. High-tech firms that hired designers to work on hardware (to, say, come up with the shape and layout of a smartphone) began asking them to create the look and feel of user-interface software. Then designers were asked to help improve user experiences. Soon firms were treating corporate strategy making as an exercise in design. Today design is even applied to helping multiple stakeholders and organizations work better as a system.
This is the classic path of intellectual progress. Each design process is more complicated and sophisticated than the one before it. Each was enabled by learning from the preceding stage. Designers could easily turn their minds to graphical user interfaces for software because they had experience designing the hardware on which the applications would run. Having crafted better experiences for computer users, designers could readily take on nondigital experiences, like patients’ hospital visits. And once they learned how to redesign the user experience in a single organization, they were more prepared to tackle the holistic experience in a system of organizations. The San Francisco Unified School District, for example, recently worked with IDEO to help redesign the cafeteria experience across all its schools.
As design has moved further from the world of products, its tools have been adapted and extended into a distinct new discipline: design thinking. Arguably, Nobel laureate Herbert Simon got the ball rolling with the 1969 classic The Sciences of the Artificial, which characterized design not so much as a physical process as a way of thinking. And Richard Buchanan made a seminal advance in his 1992 article “Wicked Problems in Design Thinking,” in which he proposed using design to solve extraordinarily persistent and difficult challenges.
But as the complexity of the design process increases, a new hurdle arises: the acceptance of what we might call “the designed artifact”—whether product, user experience, strategy, or complex system—by stakeholders. In the following pages we’ll explain this new challenge and demonstrate how design thinking can help strategic and system innovators make the new worlds they’ve imagined come to pass. In fact, we’d argue that with very complex artifacts, the design of their “intervention”—their introduction and integration into the status quo—is even more critical to success than the design of the artifacts themselves.

(…)
Tim Brown is the CEO and president of the international design consulting firm IDEO and the author of Change by Design (HarperBusiness, 2009).
Roger Martin is a professor at and former dean of the Rotman School of Management. He is the coauthor of Getting Beyond Better (Harvard Business Review Press, forthcoming) and Playing to Win (Harvard Business Review Press, 2013).